YONEX NANOFLARE 800 - that's how filigree power can be. 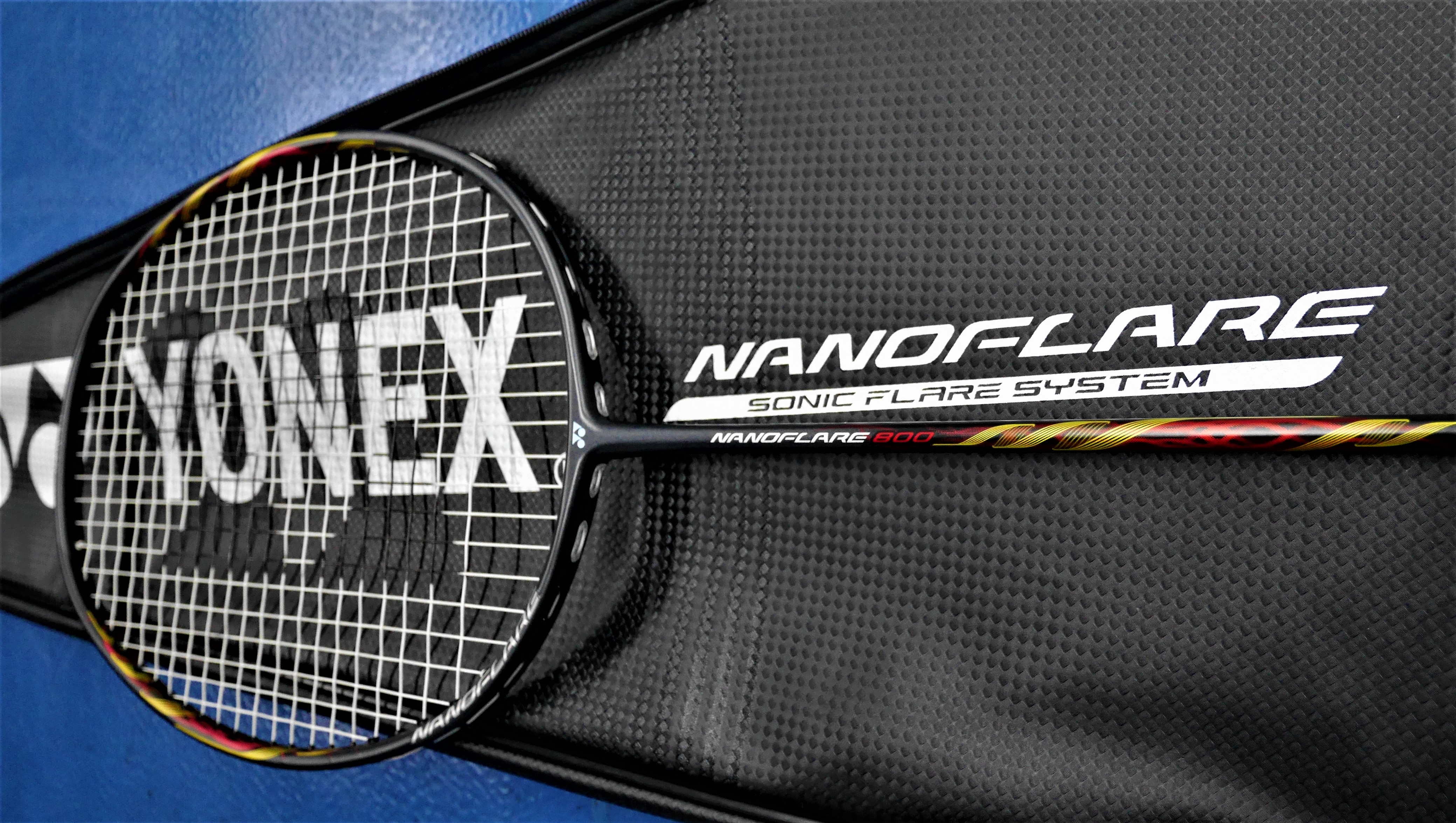 Just 7 months ago, YONEX presented the new model series NANOFLARE in Germany. Another new model in this series has now been released:
YONEX NANOFLARE 800.

On the market in particular, the new super racket has already won two major tournaments internationally. With Mayu Matsumoto as world champion in the women's doubles 2019 and Sung Ji Hyun as single champion of the women at the Yonex Chinese Taipei Open 2019. The Nanoflare 800 also has fans in the top of the world. It is currently being played by Thom Gicquel (MD), Kenta Nishimoto (MS) and Takeshi Kamura (MD) with world ranking number 4.

That naturally made us curious, and so we also subjected this racket with our BADLAB racket group to an intensive practical test. We strung our test rackets in the specification 4U / G5 (80-84g) with the Yonex string BG 80 and 11 kg.

The first impression: The design of the NANOFLARE 800 in its basic colour black-grey-matt with red and golden yellow decorations, which are abstractly reminiscent of flames, seems very noble. An ultra-thin shaft and slim frame construction (Razor Frame), as well as the very small head, make it clear at first glance that we are holding a completely different device than the Nanoflare 700, which we had already tested.

But let's get to the actual test: The evaluation was again carried out in the categories "handling", "feel / ball control", "power" and "forgive inaccurate hit", all on a scale from 1 star (hardly applies) to 5 stars ( Totally Agree).

The ultra-thin frame and the small frame profile immediately stand out in comparison to the Nanoflare 700. The resulting advantages of speed, as well as flexible and fast movements, are evaluated by our testers as very good and fast skills, especially in the double game of drive and defence.

The racket construction with handle-heavy balance described above obviously works. The handling properties were given the highest rating by our testers: 5 stars!

But the little club head also has a downside. You have to be very precise because he is not very forgiving. Uncontrolled punches and frame hits do not fail to occur with inexperienced players. In the "forgiving inaccurate meeting" category, the Nanoflare 800 only achieved 3.5 stars among our testers.

The new frame construction again proved to be an advantage when it came to hitting the ball and controlling the ball. After a short period of getting used to it, our testers raved (when meeting cleanly) that they had very good control with very good damping properties. Here, too, a top rating: 4.5 stars.

In the rating for "Power for long clears and hard smashes", the testers' comments were differentiated, also depending on their preferences for the single or double game. While the pressure in front field shots was rated as very positive, the handle-heavy balance prevents the punch of top-heavy rackets in hits from the baseline. For a handle-heavy racket, the 4-star rating in this category is still very impressive!

Overall rating of the BADLAB racket team: The YONEX Nanoflare 800 combines above-average handling properties, which pay off particularly in doubles, with very good control and damping. If you give yourself a little time to get used to it, the NANOFLARE 800 can be a real alternative even for players with top-heavy rackets, but you have to be able to play this high-quality racket. So we do not recommend beginners to this racket. For anyone else who feels at home in defence and control, we definitely recommend trying this racket.

The new YONEX NANOFLARE 800 LT is 100% identical to its predecessor model, the YONEX NANOFLARE 800, in its high-quality design and state-of-the-art Yonex technology. The fine but very decisive difference lies in the weight. With only 78 grams in the tested U5/G5 variant, it belongs to the ultra-lightweight class for demanding players, which is immediately noticeable in practice due to even better manoeuvrability of the racket. Contrary to our expectations for light rackets, the new YONEX NANOFLARE 800 LT has taught us something better: Strong swing and impact speed in smashes with absolute control, which is certainly due to the technology used in the head frame. Of course, the new noble colour combination in the basic colour black with gold and ice blue flame decorations is also worth mentioning, as with his heavier brother the YONEX NANOFLARE 800. The new "Light variant" YONEX NANOFLARE 800 LT we can encourage particularly advanced players who are looking for their focus in the offensive game with fast rallies in competition.

Thanks for your articles and reviews. I would like to publish them on badminton-players.com. do you allow me to do it ?
David