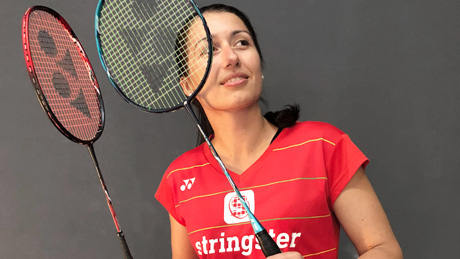 The most underestimated part of a badminton racket is the strings. It establishes contact between the racket and the ball, transmits the force and gives the player a feeling for the ball.

When the clothing becomes tired, power, feeling and precision are lost. We often hear from experienced players that it is better to play with a freshly strung mediocre frame than with a top frame and a tired string.

The new stringster app therefore wants to put the stringing in the focus of badminton players by making the string wear visible over time. A good approach, we think! But does that work in practice?

In the first step we checked whether the stringster app produces the same measurement result on different Android and Apple phones. Eight of us have put their smartphones on the table and measured them at the same time.

Our test racket was a once played VICTOR Jetspeed 10 S, covered with an Ashaway Zymax 66 Fire Power. The string was wound with a professional, digital YONEX stringing machine with 12.5 kg.

As you can see in the video, stringster has a covering hardness of 12.2 kg or 12.3 kg, which is a plausible value after playing once. And as far as our starting point is concerned: from Samsung to Motorola to different generations of iPhones, the result of the stringster app only varies by 0.1 kg. Respect!

The app's screen design is also really high quality. And since it is also free of charge, we can only recommend stringster so far!

In the second step we will do a permanent test to see how the tension decreases over time and when stringster recommends a new stringing ...