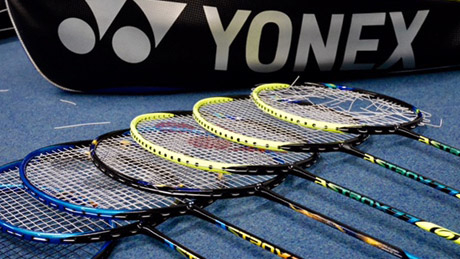 New Dimension Graphite, Rotational Generator System, Solid Feel Core, ... more stroke control, higher ball acceleration and steeper attack angles. That sounds promising. And in terms of taste, there is something for everyone with two different colors. But we are not so easily impressed! 10 test players of the BADMINTON LABORATORY racket team played the ASTROX 77 to get an idea of what these new concepts bring in practice.

And because we now know that every racket that is different from your own racket feels strange at first, everyone has played the ASTROX 77 consistently for several weeks. Each test player has also adapted the grip strength exactly to their own preferences in order to be able to form a well-founded judgment. For the covering, we decided on a YONEX BG 80 - wound up with 12 kg. In the end, the evaluation took place in the categories "Handling", "Punch / Ball Control", "Power" and "Forgive inaccurate meeting". First impression: The ASTROX 77 feels quite light for a power racket. The handling ratings of our testers were in the upper middle field: 3-4 stars.

The feel of the punch is very solid - albeit a little “indirectly” due to the somewhat longer, relatively elastic shaft. But this shaft made of a new carbon composite produces enormous amounts of power for long clears and steep smashes with just a small rotation. Almost all of our testers agreed on this point: top rating of 5 stars for power! The power concept is also supported by a slightly smaller club head. However, this contributes to the fact that the ASTROX 77 does not forgive inaccurate encounters with the racket, as e.g. the YONEX classic ARCSABER 11. In this discipline, our testers awarded "only" an average of just 4 stars. Despite such minor reservations, a clear majority of our test players could imagine the change to an ASTROX 77 very well.

Only a few players tended towards more top-heavy racquets like DUORA 10 or VOLTRIC Z-FORCE 2 to get more power in their game. However, these extreme racquets are much more demanding to play than an ASTROX 77. From the point of view of the BADLAB SCHLÄGER-TRUPPE, one thing is certain in the end: With the ASTROX 77, YONEX has built a real power racquet with very good ball control for advanced recreational and tournament players, Almost half of our testers switched to the ASTROX 77 after the extensive test, which says more than 1,000 words. Overall rating: 5 stars!