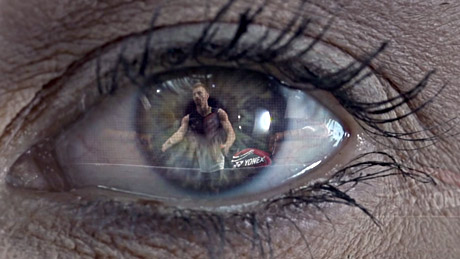 Main actor Marc Zwiebler and director Elmar Sperling in conversation with BADLAB MAGAZINE about the concept of the new YONEX video, the morbid charm of the scenery, the cooperation on set - and hopes for the development of badminton sport in Europe.

BADLAB MAGAZINE: Elmar, what was the main challenge of this film production for you?

ELMAR SPERLING: Badminton is a very dynamic sport with some extreme movements and speeds. Thus it practically imposes itself to choose film techniques such as super-slow-motion and quick cuts. On the other hand, I did not just want to stage top athletes and end up telling the audience: "Look here people, you could play as great as Marc and Birgit if you would buy YONEX equipment." I also wanted to reach the heart and soul of the audience.

BADLAB MAGAZINE: Marc, what was your first thought when you heard that the new YONEX video would not take place in a gym, but in an old music club?

MARC ZWIEBLER: I was convinced from the beginning that it will be something special. It 's great that badminton is presented in a different, cooler environment. And the atmosphere on the Reeperbahn has its own, very unique charm.

ELMAR SPERLING: I chose the morbid charm of an old cultural institution, because this setting depicts the maximum contrast to the recognized YONEX-image-dimensions such as speed and innovation. The "Gruenspan" provides the high-tech equipment of YONEX with a beautiful stage - and at the same time the video with an almost homely atmosphere. I was particularly fascinated that the classical badminton-court-green was everywhere: the stage framing and Art Nouveau decorations, the slabs of plaster on the old brick walls, ...

BADLAB MAGAZINE: Marc, you have a great affinity for music and even put on records yourself as a teenager. A badminton match as a kind of dance choreography to Dubstep Music – does that fit together?

MARC ZWIEBLER: Definitely. Even though I personally prefer listening to more melodic music, I think the tempo-change of dubstep fits the different game situations perfectly. Towards the end you can almost feel the pressure that builds up through the rally. I think that you can portray a sense of this fascinating, fast sport and introduce new people to badminton with this kind of music.

BADLAB MAGAZINE: How did you perceive the video shoot, Marc? Was it hard work to deliver the different courses of movement over and over for the different camera settings?

MARC ZWIEBLER: Of course a project like this always means a lot of work. We shot with a team of 20 people for almost 20 hours straight, considered, discarded, improved and filmed again. For a change it was really a lot of fun, but towards the end we were all pretty exhausted and glad to have everything in the can.

BADLAB MAGAZINE: How was working on the set? Was there a clear vision of what would be filmed, or was the whole thing rather experimental?

MARC ZWIEBLER: Due to the fact that Elmar comes from the advertising industry, he naturally has a slightly different view on the sport and its presentation. However, he also has enough badminton expertise to know which patterns of movement are realistic and which are not. Both attributes definately benefitted the video. The cooperation was absolutely relaxed. Despite a detailed shooting board and narrow time frames, suggestions from Birgit, YONEX and me were always welcome.

BADLAB MAGAZINE: Elmar, did you tell Marc and Birgit what was going to expect them before the shoot, or did you only tell them about your plans on set?

ELMAR SPERLING: We already knew each other from a previous photo shoot. Therefore I knew that they would do well. I only emailed Marc the link to the intro of the American series "Dexter" - with the note: "practice the t-shirt scene in front of a mirror." And I asked Birgit whether she minded to be introduced into the film through her legs. (laughs)

BADLAB MAGAZINE: A man playing against a woman. Isn’t that unrealistic? What does Birgit represent for you in this video, Marc?

MARC ZWIEBLER: Of course, this video does not want to be pure realism, but I think that you can see that both the male and the female style of play is attractive and fast, allthough sometimes with different movements. Also, I was very happy that Birgit joined us. We started to play mixed together when we were 7 or 8 years old and our careers have always been closely linked since then.

BADLAB MAGAZINE: Marc, what would you hope for the development of badminton sport in Germany? And Elmar, do you think that the video can contribute to this?

MARC ZWIEBLER: I would like badminton as a competitive sport to get a different image - particularly among young people. And because badminton is an indoor sport, more attractive sports halls and courts could also contribute to increase its fascination. At least the video suggests this.

ELMAR SPERLING: I honestly think that videos like this can make a contribution, to introduce even more people to this multi-faceted, fast sport, here in Europe. After I started to seriously play badminton a few years ago, I for one am fully infected.

BADLAB MAGAZINE: Thank you for the interview!