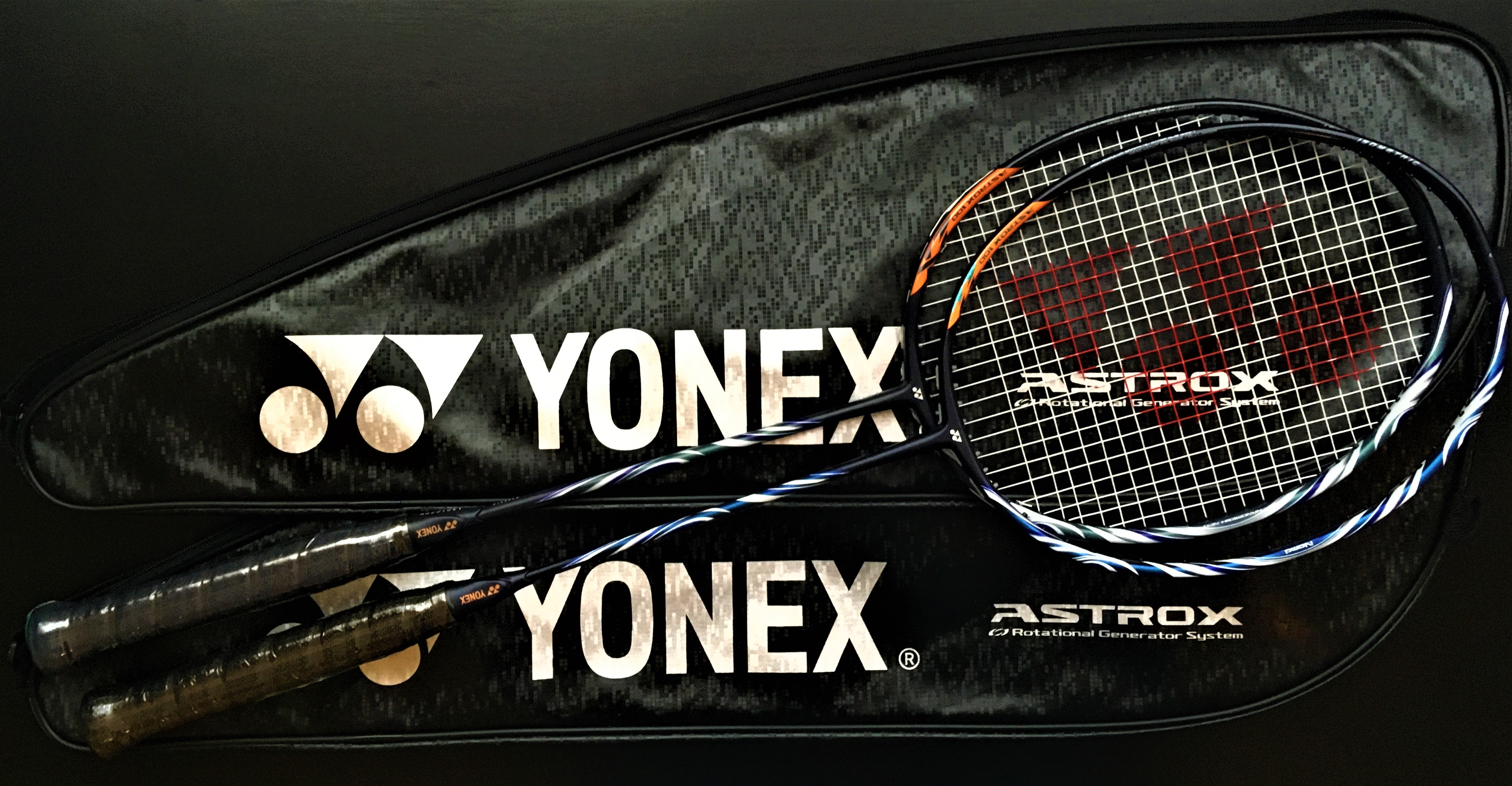 The fact that the YONEX ASTROX series stands for power has not escaped our tests of the ASTROX 77, ASTROX 88 and ASTROX 99. How can this be increased?

We looked forward to the challenge of working out the subtle differences between these two racquets that YONEX has placed at the top.

Incidentally, both rackets were strung with the new YONEX SKYARC string and the popular YONEX BG 80 (each with 11 kg / 24.5 lbs).

The test rackets were played in grip strength G5 and weight level U4 with a gross weight of 80-84 g, which gave some of us the opportunity to adjust the grip strength with the help of overgrip bands. A special feature is at the top end of the handle. Here a noticeably improved shape was developed as a hold for the thumb, in order to e.g. to give more stability during drive and net kill.

The main difference between the 100 ZZ and the 100 ZX lies in the high-quality material (Black Micro Core) in the upper part of the 100 ZZ frame.

The extra-rigid shaft of these two top models also differs. While the EXTRA SLIM SHAFT was used for the 100 ZX, the 100 ZZ got the new HYPER SLIM SHAFT as the centrepiece - the thinnest in YONEX history to date.

It may also be worth mentioning that everything on the 100 ZZ is "Made in Japan", while on the 100 ZX only the shaft and technology come from Japan, the rest is "Made in Taiwan" - which among other things could be a reason for the approximately 20% cheaper price compared to the ASTROX 100 ZZ.

The last difference is the look. Although the two racquets shine in their high-quality and elegantly appealing design, the subtle difference lies in the details. The 100 ZZ is a little simpler in its rotated color combination of matt white and navy blue than the 100 ZX, which appears a little more playful in the same design with the color combination in matt white-green-purple. Both received their respective brand names 100 ZZ or 100 ZX on orange as eye-catchers on the frame.

The evaluation was again carried out in the categories "Power", "Forgive mistakes", "Impact feeling / ball control" and "Handling" - all on a scale from 1 star (hardly applies) to 5 stars (fully applies).

Power: Both rackets deliver what our testers expected from an ASTROX 100, absolute power and speed through effective transmission of the momentum - combined with an unexpected lightness with long clears. A dream for "hard hitters" and single players. When it comes to power transmission, the 100 ZZ is a little ahead of the 100 ZX, which can probably be traced back to the "Black Micro Core" material used in the upper frame and a little more top-heavy than the twin brother. In this discipline, the 100 ZX: 4.5 stars and the top result was achieved by the 100 ZZ: 5 stars.

Forgive mistakes: With both models you should be able to hit very precisely. In particular, the racket head, which has been reduced in size compared to the other ASTROX models, makes the ASTROX`s 100 not very forgiving. And since uncontrolled frame hits did not fail to occur with less experienced players, both rackets achieved the same result in this category: 3.5 stars

Impact feeling / ball control: In our testers, the mix of innovative technologies and proven, tried-and-tested material from the ASTROX series was particularly noticeable due to the good control on the net and the very good damping properties. Neither of them gave anything here, full marks: 5 stars!

Handling: In contrast to the ASTROX 99, which lies more like a sword than a foil in the hand, both ASTROX`s 100 are more similar to the comparatively more manageable ASTROX 88 D. Due to the top-heavyness of both ASTROX 100 rackets, the defence is not exactly their discipline , nevertheless both ASTROX 100 achieved a relatively high rating of our testers. In the end, the 100 ZZ with 4.5 stars won a slight advantage over the 100 ZX with 4 stars.

Overall rating of the BADLAB racket group:
With the ASTROX 100 ZZ and the ASTROX 100 ZX, YONEX has launched two impressive “tools” that combine the advantages of ASTROX 99 and ASTROX 88 D. The advantages of power and excellent control are particularly evident in our testers in single play. But even an offensive double player will have a lot of fun striking hard. After this test, we dare to question the question whether the certainly cheaper production costs in Taiwan for the ASTROX ZX also mean lower quality. That the world-class player Viktor Axelsen plays the marginally better ASTROX 100 ZZ variant may well be an advertising strategy. Ultimately, the two ASTROX's 100 twins are so close together that the slightly noticeable difference will only affect top players. So if you want to save money, the 100 ZX is very well served in every respect.

But the BADLAB racket group agrees on one thing:
With these two top rackets, YONEX is once again setting new standards at the highest level.

Hello Shah,
on our website we write about tests, information and research about badminton but not about sales and prices. But at the moment you can find the Astrox 100 ZX for about 140 € and the Astrox 100 ZZ for 180 € on the German market. For current prices and exact terms and conditions of the various dealers, please have a look on the Internet yourself

Can you help me identify my yonex racket if its authentic.
Brand: yonex
Model: astrox 100zz
Cone serial #: 050112SP
Shaft serial #: 7953358
Thank you,,,, much appreciated if you could give me feedbacks as soon as possible.

You can check it here: