The seven most popular YONEX badminton strings in test - from BG 65 to BG 80, from Aerosonic to Aerobite Boost. 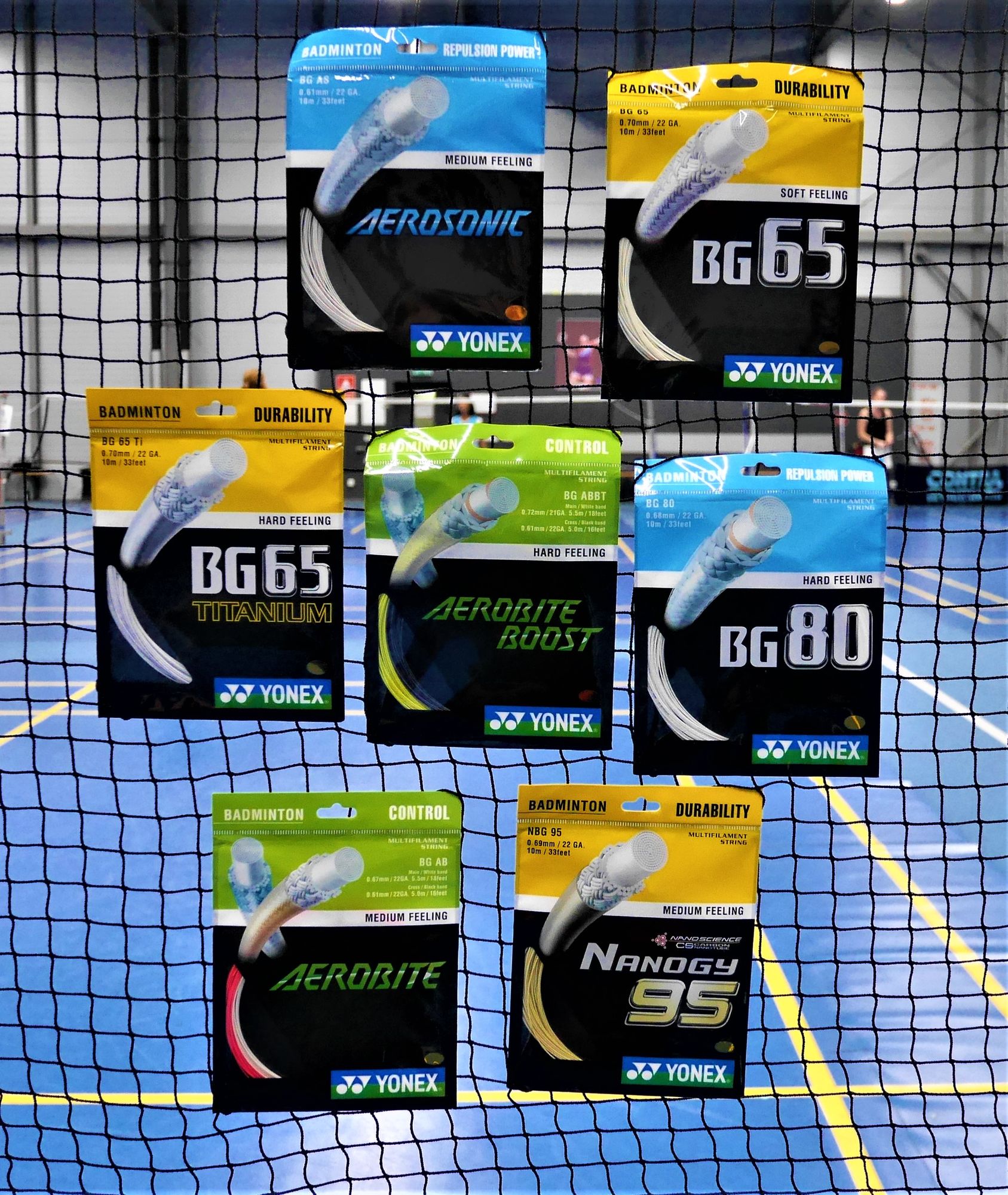 About the methodology: In order to be able to concentrate fully on the differences between the strings - just like in the first string test - all strings were again pulled with identical hardness (11 kg) on identical rackets: the new YONEX top racket NANOFLARE 800.

The character of each string was evaluated according to 8 criteria on a scale from 1 (not applicable) to 5 (fully applicable). So the maximum score is a 5th, but this time we have refrained from making an "overall score" per string to focus your attention more on the differences between the strings. After all, in the end it's all about finding the string that suits each individual player.

Let's start with the hard facts:

Rating: The YONEX AEROSONIC / 0.61 mm is the only string to achieve the unanimous top score of 5.0 in individual categories - with "good control in short game" and "supports my underhand play". The AEROSONIC also received a top score of 4.8 for "good feel", and the thinnest string in the test (0.61 mm) also managed to achieve the best score of all strings in the "Sound" category. But this very thin string also has its limits, namely when it comes to power transmission and a rich feel when smashing. For professionals it therefore "only" appears as a cross string in the Aerobite and Aerobite Boost hybrid sets.

For all other players who prefer feeling and perfect control in short game, the YONEX AREOSONIC with its incomparable sound is our top recommendation.

Rating: The YONEX AEROBITE BOOST = 0.72 / 0.61 mm is the second hybrid string of this series. As the longitudinal string here, an extra thick fiber wound from Vectran (twice as thick as nylon) was used, which with its diameter of 0.72 mm not only ensures significantly longer durability but also reduces the loss of energy on impact. The cross string is the ultra-thin Aerosonic here too. Practical tests have shown that the YONEX Aerobite Boost with its top value of 4.6 is right at the top in the category "support of a good length at Clears". Compared to the normal aerobite, however, our testers could not find any other advantages. Kevin Sanjaya Sukamuljo, the No. 1 in the world-ranking list in men’s doubles, currently plays this string combination, for example.

Rating: As expected, the YONEX BG 80 / 0.68 mm was convincing in every respect! Almost all ratings have a peak value. It is therefore no wonder that the YONEX BG 80 is one of the strings most played by professionals. The fact that the string delivers a good hitting feel is beyond question with our test results. But the real strength lies in the rich, controlled power transmission in hard smashes. On this point, the BG 80 achieved the maximum value of 4.6 over all strings in the test (together with the BG 65 Ti).
The Yonex BG 80 is a little rougher than the Yonex BG 65 and therefore balls can be cut better. However, it is also rubbed through faster. We recommend this hard top string preferably for tournament allround players. The Yonex BG 80 is currently played by world class players such as Kevin S. Sukamuljo, Chou Tien Chen, Lee Yong Dae, Anders Skarup Rasmussen

Rating: The YONEX NANOGY 95 / 0,69 mm is far above average in all our test criteria, but the special strength of this string is in our testers' opinion its elasticity and damping properties as well as an excellent feel for the hitting. The CS Carbon Nanotube material combines optimum speed, maximum rebound power and excellent durability.
We recommend this medium hard string to players who focus on speed and durability. No wonder that one of the fastest men's doubles players, Keigo Sonoda from Japan with world ranking no. 4, plays the YONEX NANOGY 95.

Rating: The YONEX BG 65 / 0.70 mm is one of the most popular standard strings worldwide and a solid all-rounder. This is also reflected in the midfield assessment of our testers. The elasticity and damping properties are particularly noticeable here. But the biggest advantage of the BG 65 is clearly its durability. From our point of view, this durable string is therefore a top choice for all those who play with nylon balls. But also NG Ka Long Angus, currently ranked No. 9 in the men's singles world rankings, prefers the YONEX BG 65.

Rating: The YONEX BG 65 Ti / 0.70 mm cannot be compared with the normal BG 65 due to the shock-absorbing Ti(tanium) coating. Our testers felt that immediately. Although the BG 65 Ti also has one of the strongest diameters in the test with 0.70 mm, it feels much thinner when playing and impresses with a particularly good sound. The biggest highlight of this string, however, was found by our testers in the controlled power transmission during hard smashes. Just as with the BG 80, the BG 65 Ti achieved the best value of 4.6 overall strings in this category. But top scores were also determined in all other categories. These advantages of the YONEX BG 65 Ti are also used by world-class players such as Marcus F. Gideon and Ratchanok Intanon.

Conclusion: Just like in our first string test, the BADLAB Racket Team was impressed by the extent to which the different string diameters and materials shape the character of a badminton racket! It's definitely worth experimenting with different strings (and stringing tensions) instead of just looking for durability - especially if you want to take the qualities of high-end badminton racquets to the limit, and if you play with real feathers! This often makes even more sense than thinking about a new frame.

About the YONEX strings in the test: The choice of the "right" string is extremely individual. What is my personal playing style? My punching technique? With which racquet must the string harmonize? We, therefore, recommend that you really look at the tables above in detail. Nevertheless, three strings stood out especially for our testers:

The YONEX AEROSONIC is our recommendation for sensitive players. For us it is the upgrade of the thinnest YONEX string Ultimax 66 so far because although the AEROSONIC is even thinner and more sensitive than this one, it is also more durable.

For the demanding all-rounder, our recommendation is shared by the YONEX BG 80 and the hybrid stringing YONEX AEROBITE. Both combine a very good feel with a maximum of control and are therefore played by a large number of professionals. Which of these two strings suits you better personally, we recommend to try them out!

A tip in passing: Every string tires in the course of time. String your rackets at least once every 3 - 4 months instead of waiting until the string breaks. An elastic string will definitely add to the fun of badminton and improve your game, because it will provide more power and better feedback! If you want to check the condition of your stringing yourself, we recommend the free stringster app, with which we at the BADLAB racket squad of course also work.

NEWS: As the new YONEX SKYARC - 0.69 mm was not yet available for this test, we tested it separately for you.