STRINGING BADMINTON RACKETS SHOULD NOT BE A BY-PRODUCT OF STRINGING TENNIS RACKETS. 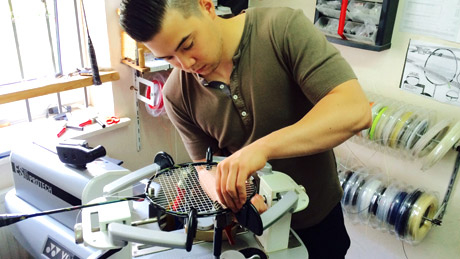 Kazuhiro Yamaguchi has been a badminton player and professional on the stringing machine at Racket-World in Hamburg since he was five. Here in an interview with Eckhardt Schütt from BADLAB MAGAZINE, "Kazu" gives a few valuable practical tips.

Kazuhiro Yamaguchi has been a badminton player and professional on the stringing machine at Racket-World in Hamburg since he was five. Here in an interview with Eckhardt Schütt from BADLAB MAGAZINE, “Kazu” gives a few valuable practical tips.

BADLAB MAGAZINE: Kazu, you told us that many hobby badminton players believe that with a bad badminton racket covering you would automatically continue to hit.

KAZUHIRO YAMAGUCHI: Yes, I encounter this fallacy almost every day. The opposite is the case: the harder the racket covering, the less elastic it is - and the smaller the so-called “sweet spot”, the area where high ball speeds can be achieved. So you can say: The harder a racket is covered, the less "power" it provides the player.

BADLAB MAGAZINE: But why do many tournament players still string their rackets hard?

KAZUHIRO YAMAGUCHI: This is where the striking technique and marksmanship come into play. If a badminton player no longer has any problems with this, harder stringing can help to further increase the precision of his shots.

BADLAB MAGAZINE: How hard do such top players string their rackets?

KAZUHIRO YAMAGUCHI: You can't generalize that. The range is roughly between 10 kg and 13 kg. Some string even harder. When making this decision, other factors such as the frame hardness and the preferred string come into play. By the way: You should import freshly strung rackets, because the strings usually take about 30 minutes to set up.

BADLAB MAGAZINE: And what about beginners?

KAZUHIRO YAMAGUCHI: I recommend beginners a covering hardness of max. 9.5 / 10 kg - mainly because it still allows a good "clear", i.e. long range. Depending on your age, physical constitution and racket frame, I recommend even less hardness.

BADLAB MAGAZINE: How big is the current selection of badminton strings at Racket World that you use to string? And which specific products / strings do you recommend to which player type?

KAZUHIRO YAMAGUCHI: So - without disadvantageing a manufacturer here - you simply have to say that YONEX offers the largest and best range of strings by far. For hobby and leisure players there are e.g. the very robust YONEX strings BG 65 and BG 3. For advanced defensive players e.g. the YONEX Nanoray 99 and 95. For advanced offensive players e.g. the YONEX BG 65 Ti and BG 80. And for ambitious tournament players, the YONEX BG 66 and BG 80, which are very thin and convey a better sensitivity. But they also tear faster if you hit the ball in the frame area.

BADLAB MAGAZINE: How long does such a racket cover last on average? And does it make sense to replace it occasionally even though it has not yet broken?

KAZUHIRO YAMAGUCHI: Of course, that depends primarily on how often and how clean the string is played. As a hobby player who only plays occasionally, you should go to max. Change the string for 12 months because then there is really hardly any elasticity left. Ambitious recreational players who, for example, play twice a week with a YONEX BG 65 and hit cleanly, are recommended to remove the string after max. 3 months to renew. Professionals who usually play thin strings (e.g. YONEX BG 66) know when to change their strings.

BADLAB MAGAZINE: You can often see how badminton players immediately cut their clothing completely as soon as a string breaks. Why are you doing that?

KAZUHIRO YAMAGUCHI: When a string is broken, the racket frame is loaded very unevenly. Cutting the other strings prevents the frame from warping.

BADLAB MAGAZINE: Speaking of warping, why are the main and cross strings pulled differently hard on badminton rackets?

KAZUHIRO YAMAGUCHI: The main strings are pulled up first when stringing. This pulls the oval club head shape slightly together. The cross strings are then pulled on with a little more weight and "pull" the racket head back into its original shape. The hardness of the main and cross strings balances out again.

BADLAB MAGAZINE: What is it that makes a good stringing service?

KAZUHIRO YAMAGUCHI: There are good computer-controlled stringing machines, for example from Yonex, Victor or Babolat. But the expertise of the stringer also plays a role that should not be underestimated - and badminton is not tennis! Most large sports houses have combi stringing machines for badminton and tennis rackets, and the focus is usually on tennis. Since badminton coverings are often only a by-product in these sports houses, it is understandable that the stringers then lack experience with badminton rackets.

KAZUHIRO YAMAGUCHI: About 25 minutes with a good stringing machine.

BADLAB MAGAZINE: Thanks for the interview, Kazu!