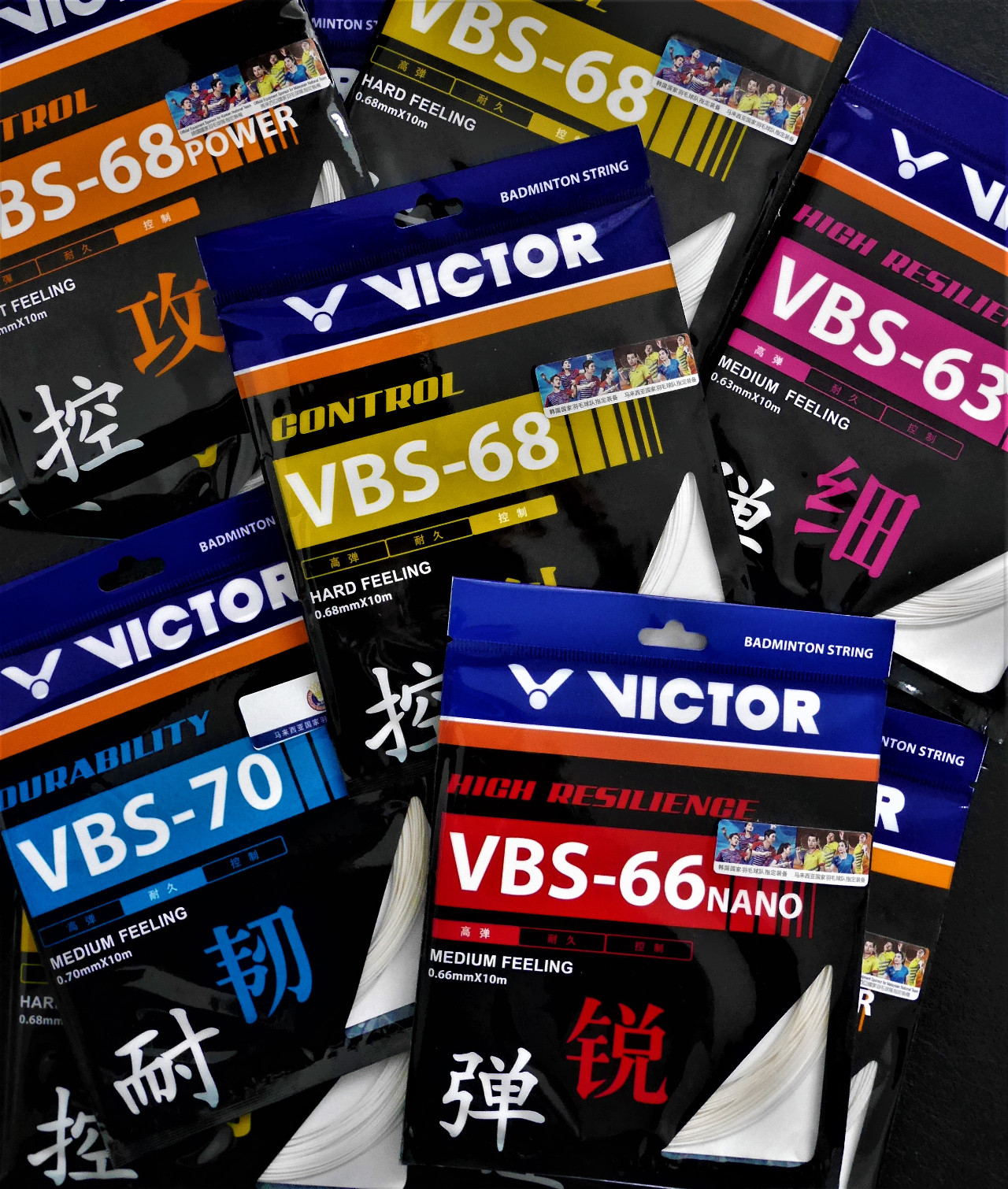 When it comes to strings, VICTOR has been cooperating with Ashaway for years and recommends their ZyMax strings. At the same time, VICTOR has now supplemented its own VBS premium string series and brought it out in a new look. The goal: to have something of convincing quality for every player type. In their first string-only test, the BADLAB racket team got an idea of ​​the extent to which this goal was implemented.

The methodology: In order to be able to fully concentrate on the differences between the strings, all strings were pulled onto an identical racket: the new VICTOR top racket Auraspeed 90 S. In addition, each individual test player tested all strings with the same string hardness: either 10 kg or 12 kg - depending on personal preference.

For our 5 testers, the test criteria were not just any laboratory measurements, but the personal impression of every single string on the racket. Of course, we didn't find out with a few strokes, but as usual in a long-term test lasting for weeks. Our testers are a well-mixed team of highly ambitious leisure players and league players up to the Verbandsliga Nord.

The character of each string was rated according to 8 criteria on a scale from 1 (does not apply) to 5 (fully applies). The highest rating is 5.

In order not to further stress torture, here are the hard facts:

Assessment: The VICTOR VBS 63 scores first and foremost with its absolute peak value of 4.6 with good control during short games (e.g. cut or short crossball on the net). The thinnest string in the test with 0.63 mm scored above average in terms of elasticity and damping properties. Just like in the controlled defense, it easily achieves a top value and the best value across all strings in the category: sound. So this string is primarily something for players who prefer the filigree short game - less for hard-hitter.

Assessment: The VICTOR VBS 66 N has convinced in every respect! In particular, the maximum value of 4.6 with the so important feeling of striking speaks for itself. Followed by top values ​​in long clears, control in short play and defense. No string has reached so many highs and is our test winner. We can recommend this string to all types of players for whom a good feel is more important than extreme durability. Because honestly: What good does it do if a string does not break, but is hardly elastic after 2-3 months at the latest?

Assessment: The VICTOR VBS 68 - brand new in the VBS range. All values ​​are far above average, but the special strength of this string is the controlled power transmission. We all agreed that the VBS 68 is a top string for tech-savvy players who don't need a pronounced trampoline effect to get enough length and hardness in their hits. The fact that VBS 68 is the most used string among VICTOR contract players should not go unmentioned here. by the popular Danish world class player H.K. Vittinghus.

Assessment: The VICTOR VBS 68 P is in many ways identical to the VBS 68. However, the damping property is better and it goes a step further in the length of the clears. Here the VBS 68P achieves the second best value of all strings with 4.2, which confirms the additional P for power. A string that makes all-rounders happy.

Assessment: With a diameter of 0.7 mm, the VICTOR VBS 70 is the strongest string, which primarily indicates long durability. That was also reflected in our test. All other VBS strings were often re-wound in the test, only the VBS 70 didn't break. We recommend this string to beginners to advanced hard hitters, as well as to everyone who plays with nylon balls.

Conclusion: For us from the BADLAB racket group, it was impressive how much the different string diameters and materials shape the character of a badminton racket! If you also take the possibilities of the stringing hardness into account, this confirms again: At least if you play with real feathers, it is worth experimenting with thinner strings. It often makes more sense than thinking about a new racket!

But about the strings themselves: the favorite of our testers and thus the test winner in the VBS string test is the VICTOR VBS 66 N.

But the topic is ultimately highly individual. Because the played frame and the preferred string hardness also have an influence on the choice of the string. We can therefore only recommend to every player to take up this topic and simply try out what "string type" you are.

Tip on the side: Stringing the racket freshly at least every 3 months, instead of waiting until the string breaks, will definitely help the fun of badminton and the improvement of your own game. Because even the best string has lost a large part of its elasticity - and thus also its power and feedback! If you would like to check this yourself, we recommend the free stringster app, which we of course also work with at the BADLAB racket group.