YONEX NANOFLARE 700: Power with more weight in the racket grip 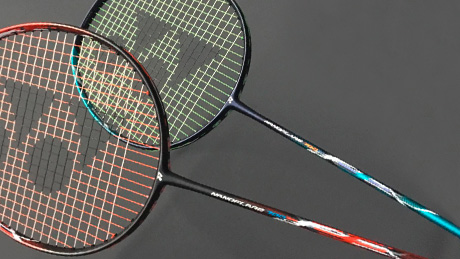 Even before the official start of sales in March 2019, the BADLAB racket troop had the opportunity to put one of the top rackets in the newly launched YONEX NANOFLARE series to a practical test. As always, we didn't just take a few hits with the rackets, but put them through their paces over several weeks. We had our test specimens strung with a YONEX Aerobite weighing 11 kg.

Incidentally, at the premiere in Japan, the racket was presented by two women: the reigning women's individual world champion Carolina Marin and Ratchanok Intanon, currently number 8 in the women's world rankings. We take this as a first indication of which target group YONEX had in mind when developing this racket and were curious to see whether easy handling could really be combined with sufficient power for the individual. According to YONEX, the Sonic Flare System design and the latest graphite technologies from TORAYCA M40X should make it possible!

From a purely visual point of view, the color variants of our test hits are both real eye-catchers. But optics is not everything. Let's see what the practical test showed! The evaluation was again in the categories “handling”, “feel / ball control”, “power” and “forgives inaccurate hitting”, all on a scale from 1 star (hardly applies) to 5 stars (fully applies).

First impression: The YONEX NANOFLARE 700 feels a bit more massive than expected, which is certainly also due to the fact that we tested a U4 racket weighing 83 g instead of the lighter U5 version weighing only 78 g.

The narrow but very high frame profile in the club head immediately catches the eye. In practice, according to our testers, this supports the good handling properties (4.5 stars), but has a somewhat less forgiving effect on imprecise hits - so it's not a racket for beginners. In the category “forgiving inaccurate meeting”, the Nanoflare 700 consequently only achieved 3.5 stars with our testers.

However, if you can play badminton and hit the ball cleanly, “feel and control” leave little to be desired. Here the rating is accordingly in the upper range: 4.5 stars!

The rating for "Power for long clears and hard smashes" developed increasingly positive among our testers during the course of the test. The shaft designated as “medium stiff” forms an effective unit with the high-profile frame. For a head-light club, the 4-star rating in this category is really very impressive!

Overall verdict of the BADLAB Test-Team: The YONEX Nanoflare 700 combines above-average handling properties with very effective power transmission. If you give yourself a little time to get used to, the Nanoflare 700 can be a real alternative even for players with top-heavy rackets. We would definitely recommend doubles players and women playing higher class to test this new racket for a few days!

YONEX NANOFLARE NEWS 2020: The NANOFLARE 700 is one of the best-selling rackets in the YONEX series in the last 2 years. From August 2020 it will be available in a limited edition: YONEX NANOFLARE 700 LTD. Technically it is unchanged, the look - which was based on the traditional Japanese Kinpaku art - is unmistakable!

If you want to secure this unique "Gold" YONEX NANOFLARE 700 LIMITED EDITION 2020, you should hurry up.