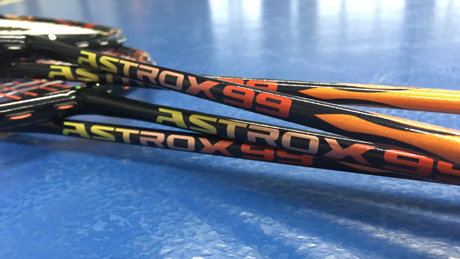 Just in time for the start of sales of the new ASTROX 99, the BADLAB racket group gives the practical test. For this purpose, YONEX had already provided us with four copies of this newest member of the ASTROX family. We tested them all with 11–12 kg for testing - with a YONEX BG 80 or an Aerobite.

After only the first 5 minutes it was clear: the new ASTROX 99 is more of a sword than a foil. This impression was reinforced by the fact that we only tested the heavy 3U version of the frame. Accordingly, the racket polarized: "Brutally difficult", "sluggish handling on the net", ... were e.g. the spontaneous comments of the testers, who usually play lighter clubs with more elastic shafts. On the other hand, anyone who comes from top-heavy, stiff badminton rackets such as the YONEX Duora Z-Strike or the YONEX Z-Force 2 was immediately positively impressed by the "spectacular combination of swing power, control and full feeling of being hit".

We can therefore already hold on here. The YONEX ASTROX 99 is not an easy-to-play all-rounder like the ASTROX 77, nor is it a tailor-made offer for different types of double players such as the ASTROX 88 S or 88 D. The ASTROX 99 is a radical special tool for single players with a clean striking technique. It fits that the freshly baked individual world champion 2018, Kento Momota from Japan and the living legend Lee Chong Wei call this new YONEX racket their favorite

The racket head of the ASTROX 99 is a little larger than that of the Duora Z-Strike or the Z-Force 2, but still significantly smaller than that of "normal-sized" rackets such as the classic YONEX Arcsaber 11. This head size underlines the racket's claim to power. Everything else is done by the new Namd graphite material, which was even installed in the entire racket (shaft and frame) of the ASTROX 99. The advantages: At slow swing speeds, the racket is hard, which increases control. At higher swing speeds, however, it becomes more flexible, which means the shaft generates more snapback power. This material also has a positive effect on the damping and the feeling for the ball at the meeting point, because it almost doubles the contact time of the racket with the shuttlecock.