NO FEAR - JUST WANT TO PLAY! 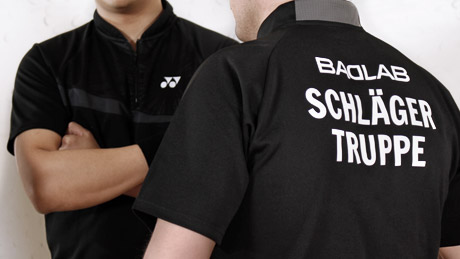 The BADMINTON LABORATORY's "racket team" has been making the Hamburg badminton courts unsafe since autumn 2013. But don't worry - the boys and girls are tough only on their equipment! Because they want answers. To the question: Which badminton racket is the right one for me as an ambitious hobby badminton player?

Beginners, as well as advanced players, are often baffled by the wide selection of different badminton racket models. The 16-strong BADLAB racket team has been helping with the purchase decision since the end of 2013 with extensive practical tests - and will report on their experiences here in BADLAB MAGAZINE from the end of January 2014.

All testers have a BADLAB SCORE (a key figure for skill level) between 3.0 and 5.0. That means they play badminton quite well, but they are not competitive athletes. For comparison: Birgit Michels, the best German woman in doubles and mixed for years, has a BADLAB SCORE of 7.5. And for the highest BADLAB SCORE of 10.0 you would probably have to be called Lee Chong Wei or Lin Dan.

We deliberately do not conduct racket tests with professional players because top athletes usually have completely different requirements for a badminton racket than ambitious hobby players.