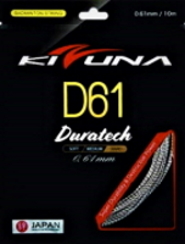 KIZUNA, a Japanese company that is still relatively unknown in Europe, has established itself as one of the most popular string manufacturers in Asia in recent years. Responsible is Mr. Abe Hideo, who founded KIZUNA in 2013 and stands for the production and distribution of badminton strings and equipment "Made in Japan". As a long-time badminton trainer and former national coach, Mr. Hideo has made it his goal to develop good badminton strings that support the game of amateur players. Many recreational badminton players lack physical condition and technique. And this is exactly where KIZUNA comes in. Good badminton strings should make you feel like a better player. BADLAB racket team tested to which extent KIZUNA achieved this goal.

Evaluation: The KIZUNA D61 Duratech / Hard - 0.61 mm is technically and optically probably the most striking string in the KIZUNA string test. The KIZUNA D61 Duratech is a two-tone, ring-shaped twisted string in which Teflon has been processed. Our testers see the advantages of this slightly rough string in it´s grip, which enables very good "control in short play" and "controlled defense in underhand play". Apparat from that, the advantages of this very hard string are probably more important for very good players than for ambitious amateur players like most of our testers.